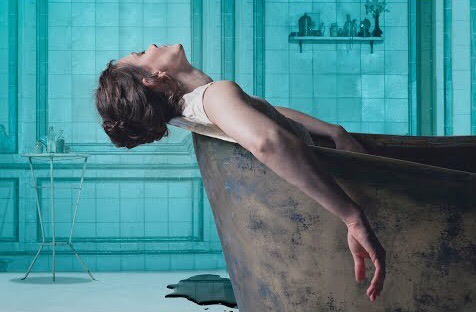 I first encountered Lisette Oropesa’s voice at Glyndebourne earlier this year when she was performing in Donizetti’s Don Pasquale, so I was delighted that not long after that, she was to return to Donizetti as Lucia di Lammermoor in her Royal Opera House debut in the first revival of Katie Mitchell’s 2016 production.

The 2016 production was not received fantastically by critics or audiences, luckily in this first revival a number of those issues have been resolved. I enjoy the split-stage staging as it adds a fascinating element to Lucia and makes her story seem far more whole although for those on the left and right hand sides of the stage, it can be a huge problem. The running water has been reduced in this production, although I noticed that in the final scene when Lucia enters the bath it had been so filled up that when she enters it water crashes out and disrupts the enjoyment of the music for quite a few minutes as it drips out and then drips down to the next stage, less full bath tub next time please!

This production is most definitely Lucia’s show with her appearing in every scene whether acting or singing, it brings so much more insight in to the character it’s a revelation. To match such a revelation in storytelling and character there is Lisette Oropesa who is a revelation by herself. Prior to, and after seeing this production I listened to Maria Callas and Joan Sutherland’s performances and I can genuinely tell you, as someone who has now seen Oropesa in the role three times, she sings it better. There is no straining in her voice, she is relaxed and her range, her ability is staggering. The Mad Scene in particular has Oropesa singing in a way that I didn’t think possible. Oropesa can’t just sing though, her acting is just as important in this production, being on stage the entire time (with a few seconds break going from one side of the set to the other) and she can really act.

Rachael Lloyd who plays Alisa, Lucia’s companion, only has a small singing role, however she is on stage pretty much the entire duration too and she is a perfect acting for Oropesa and steals the show a few times with her acting ability. Mirco Palazzi was another standout for me as Raimondo, with a brilliant voice and Christopher Maltman as Enrico, Lucia’s brother looked like he was having enormous fun being evil (and we the audience loved seeing that), but also added extra depths, especially in the final Act. The ROH orchestra and chorus were, as always, faultless.

Katie Mitchell’s production is infinitely better in this revival with a Lucia and supporting cast that just stagger you. Lisette Oropesa is incredible and gives, in my opinion, the best performance at the Royal Opera House this year, I hope she gets invited back very soon.

One thought on “Lucia di Lammermoor”